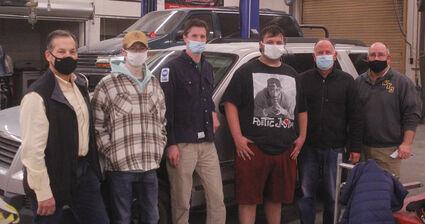 The Green River High School automotive department will get three vehicles to work on courtesy of Genesis Alkali. One of the three vehicles was delivered last week, while the other two will be sent in April.

Darren Heslep, Green River High School's principal, said the donations stemmed from a desire to purchase simulators for the automotive classes, but the idea was quickly nixed. Heslep said each simulator would cost approximately $20,000 and wouldn't be ideal for group learning. Heslep said the idea to find vehicles that could be donated to the high school came about and credited Superintendent of Sweetwater County School District No. 2 Craig Barringer with contacting area businesses to find anything the students could work on.

One of those businesses was Genesis Alkali. Fred von Ahrens, vice-president of manufacturing at the facility said Genesis Alkali often auctions older vehicles from its fleet to employees, but the company decided to help the high school and provide them with three vehicles slated to get auctioned.

"Anything we can do to get these students turned onto a future career excites us," he said.

Von Ahrens said the company recognizes the students might be future employees one day and sees the donation as a means of serving the community. Additionally, he said training students in careers with jobs available locally will keep them in the area after they graduate.

Heslep said the vehicles are much more versatile for group projects and can be configured in different ways to create problems mechanics would have to deal with. He said group projects in learning can help students become working within teams, an important skill sought by employers.

"This is a great opportunity for the kids," Heslep said.