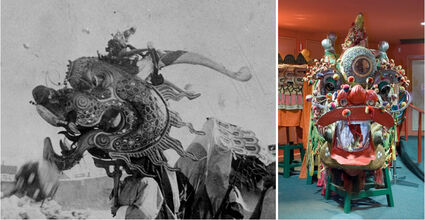 The Rock Springs Dragon, left, circa 1900, and his "brother" Loong, at right, both made at the same workshop in China in the early 1890s. Loong now lives in stately retirement at the Golden Dragon Museum in Bendigo, Australia. The Golden Dragon Museum (at www.goldendragonmuseum.com ) is home to a total of eight Chinese parade dragons.

The Sweetwater County Historical Museum in Green River recently discovered that it has a unique cultural and historical link to another museum on the other side of the world.

The county museum recently published an article and Facebook post about the huge silk dragon used in parades and processions by the Chinese community in Rock Springs well over a century ago.

All that remains of the dragon now are carefully-preserved photographs and its grapefruit-sized glass eyes, currently on exhibit in the museum's gallery.

Barely a day later the museum was contacted by the Golden Dragon Museum in Bendigo, Australia, north of Melbourne, which is recognized as the Chinese Cultural Center of Australia. Museum staff there saw the article and, as it turns out, they have in their collection a Chinese parade dragon of their own made by the same workshop in Guangdong Province in China in the early 1890s.

The county museum's former director, Brie Blasi, made the connection with a remarkable photograph depicting the back of the Rock Springs dragon's head, bearing Chinese characters that identified its maker but were difficult to decipher. The museum's current director, Dave Mead, enhanced the photograph to make the characters legible, making translation possible: the Sing Cheung Workshop of Foshan (Fatshan), about 100 miles northwest of Hong Kong, which also made the Bendigo Dragon, whose name is "Loong," meaning "dragon."

The Golden Dragon Museum's staff calls the Rock Springs Dragon a "brother" to Loong. It was brought to Rock Springs by Ah Say, an important figure in the Rock Springs Chinese community who served for years as an interpreter and liaison between the Chinese miners and the Union Pacific, and for whom a street in Rock Springs is named. Some say he obtained the dragon at the Chicago Exposition in 1893, but it is also reported that he purchased it the following year at the San Francisco Mid-Winter Fair (officially the California Midwinter International Exposition of 1894.)

The county museum's gallery features an extensive exhibit on the historic Chinese community in Rock Springs, including the infamous Chinese Massacre of September 2, 1885, during which at least 28 (and as many as more than 50) Chinese miners were killed by a mob of white miners.

The Sweetwater County Historical Museum is located at 3 E. Flaming Gorge Way in Green River. The museum is open Tuesday through Saturday from 9 a.m.,to 5 p.m., and admission is free.