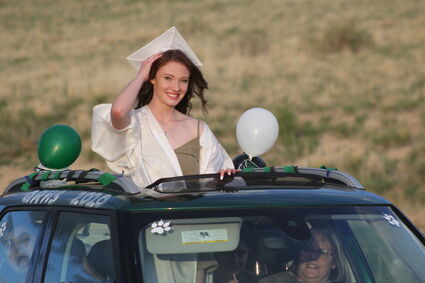 A GRHS graduate waves during the graduation parade last year at Wild Horse Canyon. A proposal in the Wyoming Legislature would consolidate the state's school districts, cutting the number from 48 to 24.

CHEYENNE - Facing massive cuts to the state's K-12 schools budget, one lawmaker has proposed a bill to study the cost-saving benefits of consolidating Wyoming's 48 school districts into 24.

"We, as a Legislature, fully understand that we have to rein in costs for education. Rather than making cuts to teacher salaries, personnel or closing down schools, I thought this was a better avenue to pursue," said Rep. Dan Zwonitzer, R-Cheyenne, who is sponsoring House Bill 77.

"I spent two years chairing the Revenue Committee trying to raise some money and revenue sources, and that was a no-go," he s...