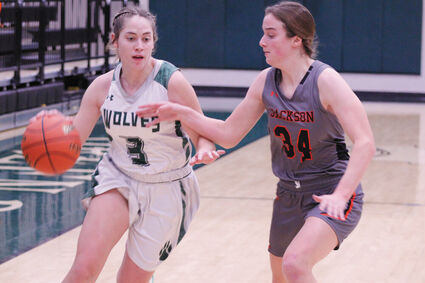 Daryn Macy attempts to run past a Jackson player during competition Saturday.

The Lady Wolves are 2-0 in their quadrant following a win at home against the Jackson Lady Broncs Saturday.

The Lady Wolves shown themselves to be an overwhelming force as they played, ending the game 65-26.

Throughout much of the game, the Lady Wolves maintained a comfortable lead over the Lady Broncs, which exploded midway during the second quarter as the Green River squad picked apart the Jackson defense and more than doubled their lead by the end of the half.

Head coach Rick Carroll said he's happy with how the girls played, saying they were able to move players into the positions the...