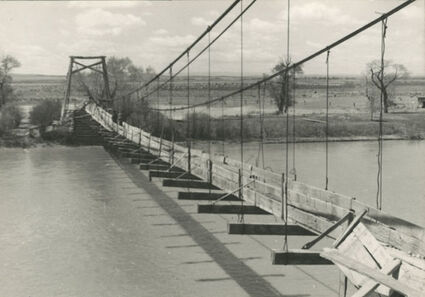 The Dodge Bridge in 1939 looking west across the Green River on the Seedskadee National Wildlife Refuge.

After the publication of its article about the turn-of-the-century Wagon Bridge in Green River the Sweetwater County Historical Museum received a number of inquiries about other historical bridges across the Green in Sweetwater County.

One photograph from the County Museum's archives of a "sheep bridge" across the Green River, shown here, depicts what was clearly a "home-made" bridge used to trail sheep across waterway. The original photo is marked "Dailey's Sheep Bridge" and appears to date from circa 1910.

Along with other sources, museum staff consulted stockman Bill Taliaferro of Rock Springs, whose family's Wyoming sheep operations extend back over 100 years. Taliaferro said he believes the bridge was located on what is now the Seedskadee National Wildlife Refuge north of Green River.

Taliaferro told Museum researchers that in the 1920s his grandfather, Thomas Sneddon Taliaferro, Jr., operated a store that catered to sheepherders and ranchers on the east bank of the river north of Big Island, and believes the bridge was located near there.

Another is the "Dodge Bridge," a far more sophisticated suspension structure built by homesteader Harold H. Dodge and completed in 1922 about seven miles northwest of the current site of the Seedskadee National Wildlife Refuge Headquarters. Dodge and his family operated the bridge, for which he charged a crossing toll, for many years. The photo shown here dates from circa 1939.

Classified as a two-span Pratt trough truss bridge, 352 feet long, it was built from 1909 to 1910 by contractor Charles G. Sheely. The bridge was officially added to the National Register of Historic Places in 1985, one of several Wyoming bridges so designated.

The museum staff reminds everyone that while the Big Island Bridge may be visited, vehicle traffic across it is prohibited.