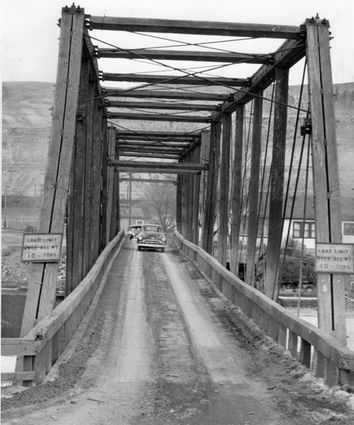 The Wagon Bridge around 1951, looking north from the south bank of the Green River.

Built in 1896, the Wagon Bridge in Green River was the only non-railway span across the entire 730-mile length of that waterway until 1910.

The Overland Stage Route, established in 1862, crossed the Green River at the Green River stage station ford at the current site of the Wyoming Game and Fish building on Astle Avenue and a ferry operated downstream, but in the late 19th century Sweetwater County and the Green River's town council agreed to put up $2,000 apiece to finance construction of a bridge. (Later, the town assumed the burden of an additional $675 in building costs.)  The bid was...