Cowboys to take on UNLV Fri. 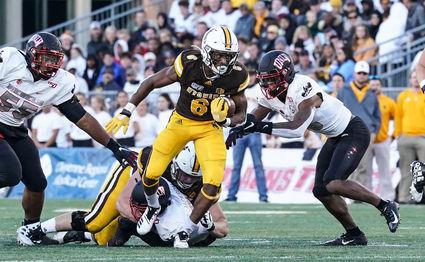 Through the years, the Wyoming-UNLV football series has been one of the closest and most thrilling series in the Mountain West Conference, including the highest scoring game in league history, four overtime battles and 14 of 24 previous meetings being decided by eight points or less.

This Friday at 2 p.m., M.T., will be the 25th meeting in the series and the first to be played in Las Vegas' new Allegiant Stadium. The game will be broadcast on radio over the Cowboy Sports Network, beginning with the pregame show at 12:30 p.m, M.T. The game will be televised live on FS1.

Wyoming has had its last two games cancelled due to COVID-19 issues within the football programs at Air Force and Utah State. The last time the Cowboys played was on Thursday, Nov. 5 at Colorado State. The Pokes enter this Friday's game with a 1-2 record this season. UNLV is currently 0-4 on the year.

The last time the Cowboys and Rebels played in Las Vegas was the 2016 season. That game resulted in the highest scoring game in Mountain West history. The two teams combined for 135 total points before UNLV won in triple overtime by a score of 69-66. But it was the Cowboys who went on to win the Mountain Division of the Mountain West Conference and earn the right to host the 2016 MW Championship Game as the highest ranked team in the conference.

Wyoming leads the overall series 13 to 11. Since 1999, the two teams have played as members of the Mountain West Conference. Here is a breakdown of the series.

The Wyoming Cowboys and UNLV Rebels have played four overtime games in the history of their series. All four of those overtime games have been played in Las Vegas. The two teams have each won two and lost two of those OT contests.

Two of the Mountain West's best

The pair were also selected by conference media members as the two running backs on the 2020 Preseason All-Conference team.

Leader of the Cowboy defense

Since leaving Wyoming, Arroyo has been an assistant coach at California, Southern Mississippi, the Tampa Bay Buccaneers, Oklahoma State and Oregon.

Passing Game Improving for Pokes in 2020

The Wyoming Cowboys entered this season hoping to improve their passing game to complement a very potent rushing attack. Through the first three games of the season, that hope is becoming a reality.

Redshirt freshman wide receiver Isaiah Neyor showed his talent in Wyoming's season opener at Nevada, catching three passes for 102 yards. His three catches went for 45 yards, 34 and 23, averaging 34.0 yards per reception. That was Neyor's first 100-yard receiving game. It was also the first time a Cowboy had recorded a 100-yard receiving game since tight end Tyree Mayfield caught four passes for 112 yards in a 35-28 home win over Air Force on Nov. 17, 2018.

In Week 3 of the season against Colorado State, senior wide receiver Ayden Eberhardt recorded the first 100-yard receiving game of his career with seven catches for 132 yards. He had five receptions of 10 yards or more, including catches of 12, 15, 17, 21 and 56.

Neyor Ranks No. 2 in the Nation in Yards per Reception

Cowboy wide receiver Neyor has been one of the most explosive receivers in the nation this season. He currently leads the MW and ranks No. 2 in the nation in receiving yards per catch (29.83 yards per reception).

The native of Fort Worth, Texas, has recorded five receiving plays of 10 or more yards this season.

Williams completed 19 of 31 passes for 321 yards against the Rams. His previous high passing game was 234 passing yards in Wyoming's victory over Georgia State in the 2019 NOVA Home Loans Arizona Bowl. The Arizona Bowl was also Williams' first career start.

Williams currently ranks No. 1 in the Mountain West and No. 12 in the nation in average passing yards per completion, averaging 15.0 yards per pass completion.

After Friday's UNLV game, Wyoming is scheduled to play the New Mexico Lobos on Saturday, Dec. 5. New Mexico has been playing its home games in Las Vegas' Sam Boyd Stadium, so the Cowboys could be traveling to Las Vegas two consecutive weeks.