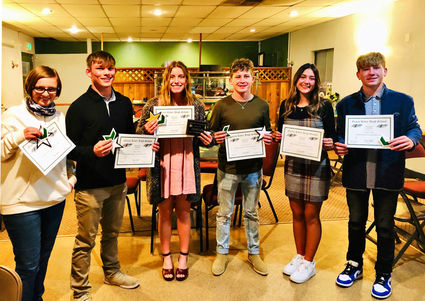 Members of the Green River High School golf team hold up the athletic certificates and patches they received from the high school.

The Green River High School golf team finished a very successful season this year despite several set backs, including one of the varsity girls getting injured in a car crash and missing the rest of the season, as well as not being able to practice at their home course the entire week before conference because of storm damage.

The girls' success continued to State, where they took third with Salas earning a medal for placing second. She received All-State honors. Salas was also selected to represent GRHS on team Wyoming at the National High School Championship in Pinehurst, N.C.

The boys team had Ryker Mele finishing in the top 10 twice this season, including a first-place finish at the home tournament. The boys also had three top 50 finishers, sophomores Braycer Riley and R. Mele and junior Jax Peterso, in a very large and competitive field at State.

The JV had a great season with Foster, sophomores Hanna Grasmick and Travis Brady all finishing top 10 at the Kemmerer invitational. Travis and Kayde both qualified for conference as well.

According to assistant coach Danielle Salas, every one of the varsity golfers shot their personal bests this season and this team will continue to improve.

The team also looks forward to seeing some new and returning faces during its spring season, where it will bring in collegiate and PGA-level experts for a clinic.