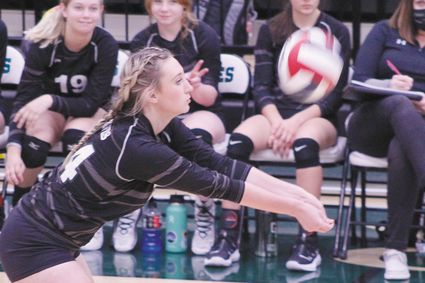 Callie Raney prepares to bump a serve made by a Cody player Saturday afternoon in Green River. The Lady Wolves struggled against the Fillies, dropping the game in three sets.

A long struggle for a win finally ended for the Lady Wolves volleyball team Thursday night.

The team won both their first set and first game Thursday night at home when they took on Riverton. The Lady Wolves took the game by winning three out of the four sets played. Riverton took an early lead winning the first set 25-20, but the Lady Wolves rebounded in the final three sets, winning 25-22, 25-20 and 25-16.

That momentum didn't last as the Lady Wolves lost their Saturday game against Cody in three sets.

The Lady Wolves struggled against the Cody Fillies throughout the match and we able t...