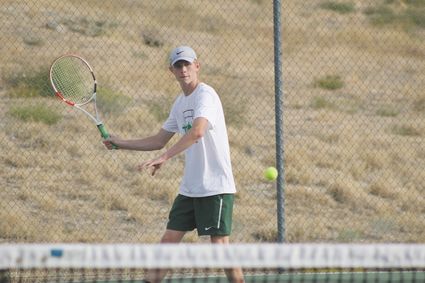 Connor Friel winds up during competition at Regionals in Green River.

The Green River High School tennis teams finished state outside the top three in 4A, but fought hard in their last competitions of the season.

The Lady Wolves finished fourth overall, while the Wolves placed fifth at the state championships in Gillette. Members of the team took a state championship, with the Doubles No. 2 team of Braxton Cordova and Zach Friel earning the top prize in their division.