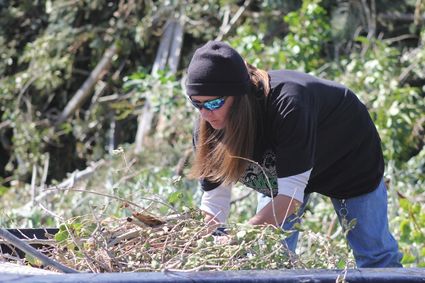 Gina Barta grabs a bundle of branches in the back of her pickup truck that she would toss into a growing pile of tree limbs and stumps at the city's rodeo arena parking lot Friday afternoon. Barta said it was her sixth trip to the lot since she started cleaning up after a winter storm caused damage and uprooted trees last week.

Days after a storm some are dubbing the "Wyocane" hit Green River, people were still cleaning up.

Trucks with loads of branches and trees could be seen arriving and leaving the city's rodeo grounds parking lot Friday.

The city opened the lot to residents looking for a place to dump trees and branches that had been knocked over during the storm.

By Friday afternoon, a massive green wall had been erected as residents continued their cleanup efforts. Steve Core, the communications manager for the city, said plans were in place to bring a large grinder in to mulch the material. He said the m...