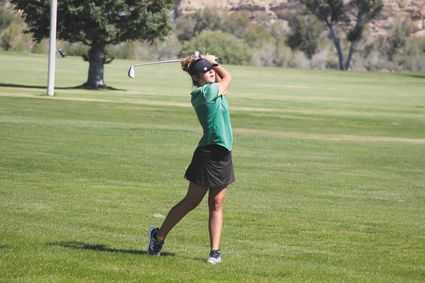 Isabell Salas watches her ball fly towards the green while competing at the Green River Invitational last week at Rolling Green Country Club. Salas led the girls throughout the competition.

The Wolves competed in a one-day tournament last Thursday in Rock Springs. The event was originally scheduled as a two-day competition, but the schedule was changed. Green River used their open Friday to practice at the White Mountain Golf Course in Rock Springs. The boys team tied with Lyman for last place, taking seventh with 407 strokes.

The girls tied for third with Evanston, with both teams finishing with 286 strokes. Individually, Isabell Salas finished fourth with 87 storkes, followed by Kalee Lundgren in 14th with 99 strokes and Kaelea Corbson, tying for 15th with 100 strokes. Daryn Mary took 25th with 113 strokes while Luel Adams took 28th with 116 strokes.

Green River golfers were the on top of both the boys and girls divisions last Thursday.

Ryker Mele scored 80 at the Wolves' home course at Rolling Green Country Club. He was followed by Stockton Walker of Lyman with 83 strokes and Sam Young of Rock Springs with 84. Other Wolves competing Jax Peterson with 103, Jake Probst with 107. Braycer Riley with 108 and Clayson Mele with 112. For the girls, Salas led with 78, followed by Marley McPherson and Audry Feagler, both of Rock Springs, who scored 88 and 91 each. Other Lady Wolves completing were Kaelea Gibson with 96, Kaylee Lundgren with 98, Daryn Macy with 99 and Devynn Byington with 122. Overall, the boys finished third out of five teams with 398 and the girls finished second out of three teams with 272.

On the second day of competition, the boys struggled while the girls took the top slot in their division. On the boys side, top honors went to Laramie's Jackson McClaren and Evanston's Lind Braxton, who tied for first with 73 strokes. R. Mele finished with 85, Peterson with 97, Riley with 101, C. Mele at 109 and Probst with 112. Overall the boys finished last out of five teams with 402.