Expedition Academy: A school and family aiming for success 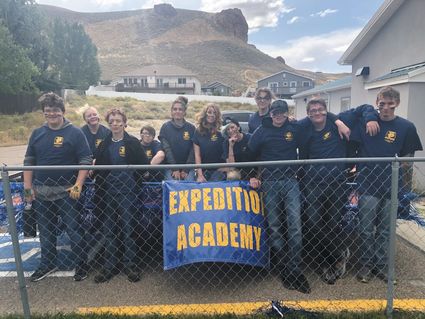 Students at Expedition Academy gather after marching in the homecoming parade last year. The school offers students an alternate means of earning a diploma, while introducing them to the community through various service projects

The greatest hope is to empower students to become innovative thinkers, creative problem solvers and inspired learners that are prepared for the choices in their lives according to Expedition Academy's website.

The school, operating in Green River since 1999, has worked to provide a safe and challenging family environment where students can find a comfortable place to learn. It provides an alternate means of earning a diploma, as well as a place to get more connected with the community. Yet, throughout the community, people often label the school as a place where troublesome students, on the verge of being kicked out of the school district, are sent. However, for the students, faculty and residents who have spent time at the school, those claims couldn't be further from the truth.

One of the students currently attending the school is Skylar Johnston. Johnston is a senior who will graduate in October. He attended Green River High School before transferring to EA his junior year, attracted to the alternative high school because of its smaller classes. The smaller classes offer a chance for extra one-on-one help between teachers and students.

"Not only does EA go out of their way to help their students," Johnston said. "But the school also provides a family environment unlike any school I have gone to before."

Johnston's favorite part of the school is the environment, the longer class periods and unique courses offered, such as Wildlife Conservation.

"You will never find another school that has teachers as willing to help a student as the EA staff," Johnston said.

He believes some of the major differences between the two schools is the difference in schedules, the population and the credits. EA operates on a block schedule, meaning there are only four classes a day, with each class lasting 87 minutes apiece. With this schedule, classes are completed in a quarter rather than a full semester at GRHS. The similarities between the schools are technical things such as dress code, phone policy and other rules.

Johnston believes the school is beneficial to the city and county because it finds ways to give back to the community. Expedition students perform a great amount of community service which includes cleaning up highway trash, volunteering at Golden Hour Senior Center and participating in programs such as Bowls of Caring.

The school also does their fair share of hosting and participating in community events. The school hosts a Santa's Workshop for kindergarteners, in which they get to decorate cookies, make crafts and sit with Santa and his elves. Students also volunteer at the library, participating in its Harry Potter party and have participated in the homecoming parade last year.

The man in charge

Ralph Obray has been the principal at EA for seven years. Obray's wife originally found the job posting while visiting family in Idaho for Christmas. During this time, Obray was working as a staff member of a school in Casper.

According to Obray, his wife told him it was the perfect job for him and after reading the description himself he agreed. He put in his application and not too long after, was offered the job.

Obray said he has always loved working with children, especially the kids who needed help and said he couldn't have been more excited to start the job at EA. Some of the first things he heard about the school were the most common misconceptions, such as it being referred to as the 'bad kids school' or a school for kids 'who aren't smart enough for regular high school.' This upset Obray, but more than anything it made him even more excited to prove those naysayers wrong.

At his previous job, Obray often handled disciplinary problems, but he always seemed to get along great with the kids that were sent to him. He said most of the time there was a misunderstanding or a valid reason for their behavior. With this past experience, he did not have any prejudices going into the job.

After working at the school for over half a decade, his view on both the school and its students has only changed for the better. Before starting the job, he was under the assumption that his students would be the same as any students. However, he said he was pleasantly surprised about the students being exceptional young adults.

"The students and the staff are all incredible people," Obray said.

"Green River High School is an excellent school," Freeman stated in an interview. "But, it can't meet every student's needs."

Freeman also feels as though a lot of alternative students feel left out or unwanted in the community. Expedition Academy and other alternative schools give those kids a place where they feel included, wanted and cared about. EA also opens doors for it's students in the community, through the amount of community service they do. This gives students the opportunity to talk with members of the community and establish relationships with them. 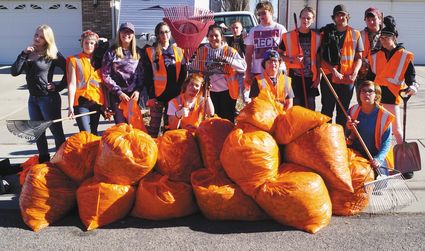 EA students pose with the trash they collected during a cleanup project students were involved in.

Freeman has helped to sponsor and pass several bills regarding alternative schools. When he first arrived in the legislature, the state would not allow more alternative schools than those that were already established. He helped to change that rule and six more schools have opened in the following years. He also sponsored bills to have requirements for graduating from an alternative school altered as they were initially very difficult to meet. Freeman pushed the idea that alternative schools are just as good as public high schools.

Freeman and Obray both said that they could not be more proud to have been part of alternative schools.

"I am truly amazed by what these kids can accomplish," Freeman said.

Johnston said that he would not have graduated until next school year had he not chose to go to EA. He said that EA pushed him to be his best and to make sure that he gave back to his community.

"I am so thankful for all that EA has done for me," Johnston said. "I don't know how far I would have gotten without them."