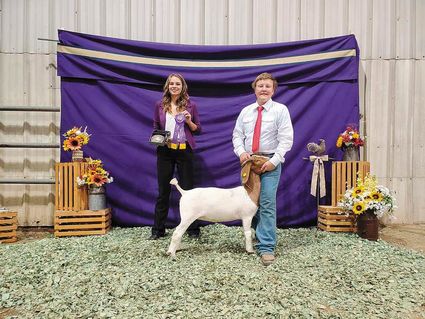 Zackery Mikesell herded up a few impressive titles while showing his goat at the Sweetwater County Fair.

"I was really excited, I hadn't won a belt buckle in two years," Mikesell said.

Mikesell brought a pure-bred boer goat to the fair, which he started raising March 27. His days would see him wake up at 8 a.m. to go to the 4-H Barn to feed, water and walk his goat. Afterward, he would brace his goat to help get it prepared for the show ring.

Bracing causes a goat to flex its muscles while being shown. A goat's feet are set in a square and the showman gently presses their inner thigh against the front of the goat, which pushes against the force being exerted on it. Along with this, Mikesell also worked to let the goat become comfortable with being touched by a judge, ensuring it wouldn't jump around as it's being shown. After going through the morning routine, he would return in the evening and complete the routine again, every day until the fair.

Mikesell learned to raise animals while spending summers with his aunt and uncle in Utah. His last champion buckles came from competitions in the Bee Hive State. He views raising animals as a hobby he enjoys participating in, saying the experiences involved are memorable.

However, despite having experience showing animals, Mikesell said he still feels nervous when he's in the showman's ring.

"When you get in the ring, you start sweating a lot," he said. "You get nervous when (the judge) starts talking to you."

Entering his first year at Green River High School this fall, Mikesell said he intends to keep up with both 4-H and FFA.