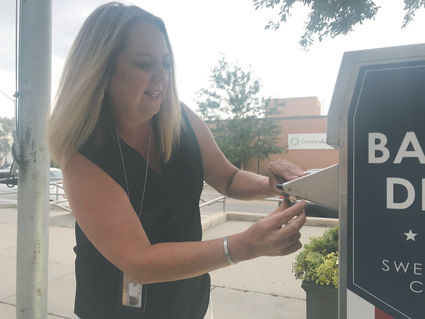 The Sweetwater County commissioners will get a shake up in 2021 as incumbent Wally Johnson will not be a part of the group.

During the Primary Election Tuesday, Johnson missed out on proceeding after falling to third and being unable to surpass votes for Mary Thoman and incumbent Lauren Schoenfeld, who will go on to be the Republican nominees for the two available positions on the commissioners' board. According to unofficial results, Schoenfeld and Thoman were only separated by one vote, with the incumbent receiving 2,634 and Thoman receiving 2,633. Johnson received 1,825 and Green River resident Mark Peterson received 1,439.

As ballots were being counted, Johnson said he didn't mind if he made the cut or not, saying he could go on vacation. After the last precinct was reported, he congratulated Thoman while she attempted to console him after his defeat.

"You got it, congratulations," Johnson said to Thoman.

Thoman said she is happy to have made it through the first round and looks forward to the next portion of the campaign. While the coronavirus pandemic did impact candidates' ability to meet residents, Thoman said she felt the media provided a great means of allowing candidates to talk about their platforms.

"It's been a pretty lively race, considering," Thoman said.

Johnson has been a part of the county commissioners board since 2011, after winning election to a special two-year term when the county increased the number of commissioners to five members. He spent much of that time as the board's chairman. He also served one term on the board from 2005-2008.

The two Democrats in the commissioners' race, Joe Barbuto and Dave Gray, will move on the November election as well. Barbuto received 1,768 votes while Gray received 1,332.

Barney said he isn't sure if he will seek election to another office as the next election is in two years and he doesn't know what he'll be doing then. However, he did make one observation.

“Thank you to the voters of House District 60 and to everyone who helped with my campaign. Now it’s time to set our eyes on Cheyenne. Thank you as well to my Democratic opponent Mike Burd, who ran an admirable campaign. I look forward to working with him in the future to build a better Wyoming," she said.

While the Primary Election had no consequences for Council candidates, the results will give candidates in one ward an idea of where they stand with voters and what they should do before the November election.

In the empty Ward II election, 76 write-in votes were received. A write-in candidate could get placed on the General Election ballot should they receive enough votes.