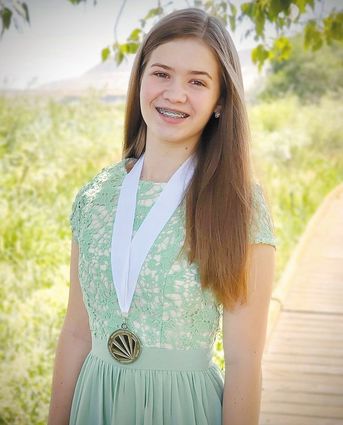 Emmalee Skinner was named Distinguished Young Woman of Wyoming at the conclusion of a statewide scholarship program Saturday.

Skinner was awarded $3,600 in cash scholarships and will represent the state as its Distinguished Young Woman through 2021.

She is the daughter of Bradlee and Melissa Skinner.

Skinner was one of seven girls competing to represent the state. A virtual program was hosted through video conferences and submissions during the week of July 27, with the finals taking place Aug. 1.

Participants were graded in five categories: Scholastics, Interview, Talent, Fitness and Self Expression.

Skinner was the overall winner, as well as the top two in Scholastic, Self Expression, Fitness and Talent.

Skinner will travel to state events throughout the year to serve as a role model to younger residents by spreading the Distinguished Young Woman program's message of "Be Your Best Self."

The outreach program is designed to encourage self-esteem and excellence in all young people through its five principles: Be Healthy, Be Involved, Be Studious, Be Ambitious and Be Responsible.

Skinner will travel to Mobile, Alabama with 50 other representatives to compete for the opportunity of being named Distinguished Young Woman of America. The competition takes place June 24-26, 2021..

The program was established in 1958 to encourage people to reach their full individual potential.