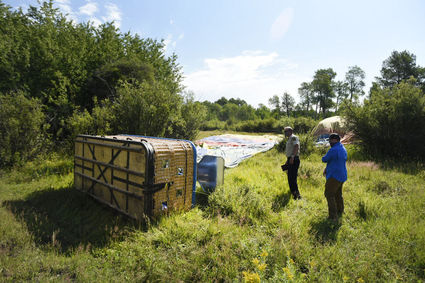 Teton County Sheriff Matt Carr and Investigative Sgt. Clay Platt examine one of three balloons that crashed Monday morning during a flight near Teton Village, injuring more than a dozen people. One person was seriously injured and was flown to Eastern Idaho Regional Medical Center, and five others were driven by ambulance to St. John's Health.

The multi-balloon incident is under investigation by federal authorities.

More than 16 passengers were hurt. Some of them described the incident as "terrifying."

"We were descending so fast," Clinton Phillips told the Jackson Hole Daily. "It was lifting us up and slamming us back down again. We were desperately trying not to fall out."

Phillips said the balloon he was in was carrying about 20 people, including him, his wife Jade and their three ch...