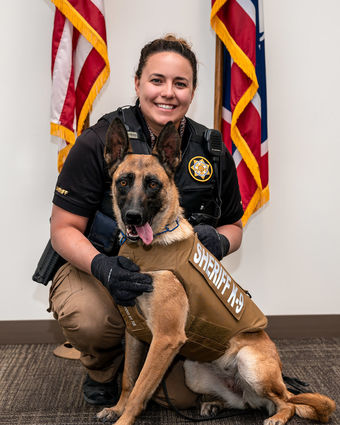 K-9 Deputy Deena and her partner, Deputy Mammano, show off Deena's new protective vest, which was donated to the Sweetwater County Sheriff's Office.

A four-legged Sweetwater County Sheriff's Office deputy is sporting some new protective gear thanks to a kind donation.

K-9 deputy Deena was awarded a bullet and stab-protective vest by Vested Interest in K9s Inc., a non-profit organization specializing in providing protective gear and assistance to dogs of law enforcement.

According to a release from the sheriff's office, the vest, normally pricing $1,744-$2,283, was the result of a donation of $960 made by sponsor, Mark Riccardi of Monument, Colorado. Vested Interest accepts tax-deductible contributions in any amount, although a donatio...