A queen seeks her crown 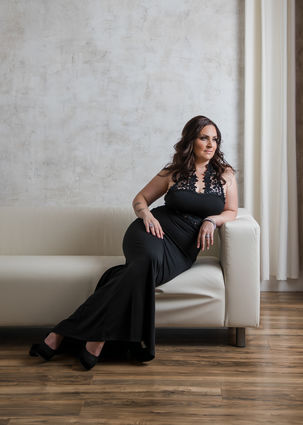 Bree McMullan is no stranger to beauty pageants.

Bree's youngest daughter, Rylie, was crowned the 2019-2020 Baby Miss All American Girl for Wyoming and earned the national photogenic award while competing at the All American Girl National Finals last year. Bree's two other daughters compete on the pageant circuit as well and pageants are something Bree's in-laws have a lot of experience competing in.

When the opportunity to become Mrs. Sweetwater County arose, Bree decided to jump into the pageant scene and compete herself.

"Now is my time," she remembers thinking to herself when she applied.

Bree was selected to be Mrs. Sweetwater County after submitting an application to the Mrs. Wyoming Pageant organizers and will compete for the Mrs. Wyoming title in Denver July 15 at the Denver Mart DriveIn. Interviews and the individual segments will be filmed the weekend prior and will be edited into a film shown July 15 at the drive-in theater, after which the winners will be crowned. The event is hosted in conjunction with the Mrs. Colorado Pageant as the two pageants are owned by the same organizing company.

The Mrs. America Pageant was established to honor married women throughout the United States.

According to the website pageantplanet.com, the pageant is the longest-running pageant for married women, originally being established in 1939 as the Mrs. American Pageant. However, the modern incarnation of the pageant was started in 1977 after the original pageant went dormant in 1968. Contestants compete in three categories: evening gown, interview and fitness or swimsuit events and are evaluated by a panel of judges. The coronavirus pandemic has impacted the pageant like every other event and changes were made to the format to accommodate social distancing and other health guidelines. While the pandemic will result in a different experience, Bree's excitement hasn't waned.

"I've been excited to go since before coronavirus hit," she said.

The main crown Bree seeks is the Mrs. Wyoming title, but there is also a people's choice category where visitors to the http://www.mrscoloradoamerica.com website can vote on their preferred competitors.

Bree said her first experience competing on a national stage was while she assisting Rylie during the All American Girl National Finals in Las Vegas. Rylie was 18 months old at the time and Bree was on stage as she presented her daughter to judges.

"I felt like I rocked the stage," Bree said about the experience.

This time, Bree said she feels like she's showcasing a new side of herself. She said she's always had confidence in who she is, but is making that aspect more well-known as she prepares for the pageant. Showing that confident side of her personality is what she finds most appealing about the competition, saying she feels a sense of accomplishment because she's a mother to five children. Those children, especially her daughters, have shared in Bree's excitement. She said her oldest daughter has been cheering her on as she prepares for the pageant.

Even Rylie has gotten excited for the upcoming pageant, taking an interest in what Bree will wear.

"My baby loves my dresses," she said.

Bree hopes to use this experience to bring more positivity into the world, wanting to inspire her family and the residents of western Wyoming.

"I'd love to be able to win and bring that positivity and energy to this side of the state," she said.

So far, Green River has thrown its support behind Bree and her Mrs. Wyoming campaign. She said several businesses and residents have provided her with a great deal of support as she prepares for the competition. Some have provided financial support while other's have helped though fundraisers and events to help Bree attain her Mrs. Wyoming dream. As the July 11 weekend approaches, the exhilaration she feels only continues to grow.

"I'm super excited about it ... it'll be a great time for me," Bree said. "My goal no matter what is to become the next Mrs. Wyoming."

A previous life on screen

Bree isn't native to Wyoming, but she fell in love with the state and Green River when she moved to the area with her older sister. She decided to stay and met her husband, Robert, soon after.

While living in Utah, Bree had worked for a modeling agency while in high school. During that time, she appeared in "Everwood," a 2002-2006 television series which included future movie star Chris Pratt in its cast. She also worked as an extra for "High School Musical." Bree took up social causes as well, being a member of the Utah Phoenix Alliance, a group opposing tobacco use in films.