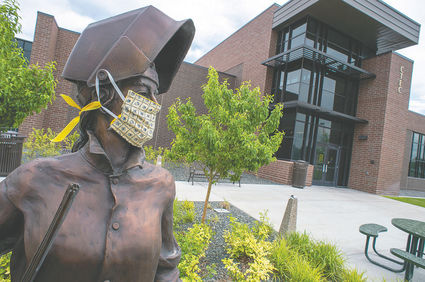 Someone at Eastern Wyoming College in Torrington took social distancing to a new level recently, placing a cloth face mask on the bronze statue of a female welder outside the CTEC building on the campus. Since the virus reached Wyoming, creative people across the state have adorned statues, animals and even houses with the masks that have become a familiar sight in the face of the pandemic.

CASPER - More than half of Wyomingites say they're comfortable attending large outdoor events this summer, according to the latest University of Wyoming survey on the impacts of coronavirus.

The study found an overall drop in support for following measures recommended to slow the spread of the virus.

Still, while the number of people who are changing their routine, washing their hands and avoiding physical contact with others continues to drop, the majority of the nearly 500 people surveyed said they were undertaking those measures. The number of people who said they were avoiding public gatherings dropped by 12 points compared to the May survey, but 58% still say they're not going to those events. Fewer people are washing their hands more frequently, a drop from 66% to 58%. There was a 10-point drop in those who are avoiding physical contact with others, but 58% are still doing so.

The survey has been released regularly since mid-March by the Wyoming Survey and Analysis Center. It has tracked the broad effects and impacts of the virus, from how many people have lost jobs or wages to those who are changing their behavior to prevent the spread of the disease.

As the situation has improved in Wyoming and state officials have eased public health orders, the survey numbers continue to show fewer and fewer people adhering to state and national recommendations. Fewer people - though still a majority - reported support for closing schools, a shift from nearly 70% to 52%. Fewer than 50% said they supported closing day care centers and restaurants and bars, and just 33% said they supported a shelter-in-place order. The latter measure has never received majority support, according to past surveys.

More people are reporting that the pandemic isn't a major problem and that the worst is behind us, though a quarter still say the worst is yet to come and 24% said they're unsure. Of those surveyed, 46% said the virus was "blown out of proportion," an increase of 22% from the first survey in March.

Only 38% of Wyomingites said they were "very likely" to receive a coronavirus vaccine when it becomes available, a drop of 11 points from May. Another 22% reported being "somewhat likely" to get the vaccine, and 26% reported that it was "very unlikely" they'd be vaccinated.

Purchasing common household items appears to be getting easier. Last month, 51% of people said they were having trouble; the number now stands at 36%. One-third said it was difficult to buy the food they wanted, a drop of 13 points.

Approval for Gov. Mark Gordon and President Donald Trump's handling of the pandemic remain high. Gordon's net approval - those who approve minus those disapprove - is at 46%. Trump's is at 17%.

Two-thirds of those surveyed said they remained "very concerned" about the virus' impact on the economy, along with one-quarter who say they're somewhat concerned. The "very concerned" group has dropped by 5 points.

Nearly two-thirds reported they were somewhat or very concerned about the pandemic's effect on their personal finances.