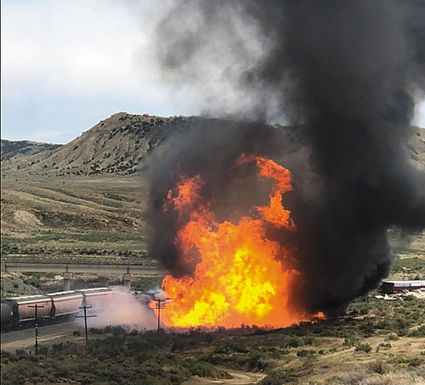 Fire spreads from a derailed train and cars Saturday afternoon four miles east of Rock Springs. The cause of the derailment is still under investigation.

An investigation into the cause of the Saturday derailment east of Rock Springs is ongoing according to a representative of the Union Pacific Railroad.

At 2:54 p.m., a UP train derailed 39 cars four miles east of Rock Springs, near the airport road. The derailment resulted in an explosion and fire. Smoke from the blaze could be seen for miles around the affected area.

According to Raquel Espinoza, a spokesperson for UP, the train consisted of 116 rail cars carrying mixed freight, including alcohol, which was involved in the fire. She said nine of the derailed cars were damaged or burned du...