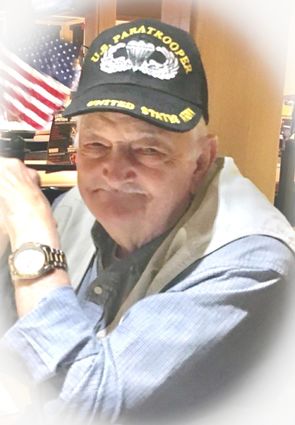 On Monday May 11th, 2020, Lavern "Vern" Jones, loving husband, father of four and Papa to many passed away at the age of 83 in his home surrounded by his family.

Vern's story starts on October 18, 1936. He was born in Concordia, KS, the 3rd child of Armel and Helen (Schaffer) Jones. Vern grew up in Concordia where he and his brothers worked with their dad on the family farm. He enlisted in the Army on March 14, 1954 where he was a proud Airborne Paratrooper with the 11th Airborne Division in Augsburg, Germany until March 15, 1957.

After returning from the service he met the one and only love of his life Diane Wagner in Beloit, Kansas. They had a whirlwind romance and they were married on June 28, 1957 and would have been married 59 years when his beloved wife passed February 24, 2016. In December 1957 they had their first child, Jody Diana followed by son Robert Allen in June 1959, daughter Deidra "Dee" June in March of 1962 and Lee Wayne in March of 1963.

In 1972 Vern moved his family to Rock Springs, WY where he lived the rest of his life. He worked for Jim Bridger Power Plant for many years as a Pipefitter. In 1992 Vern and his two sons managed Fire Systems where two of his grandsons, Nathan and Cory worked. In 1997 Vern bought the Rock Springs Franchise of Avis Rent a Car where he employed several family members, who helped manage the business. He retired in 2015.

Vern was a proud member of Sweetwater County Search and Rescue from 1989 to present. He was a commander for many of those years. He would talk for hours about the good and bad times with all the many friends he made and still had coffee with every Sunday. Vern was a die-hard Denver Bronco's fan, he was lucky enough to go to four home games. He loved to play poker of all kinds, going to Vegas twice a year was one of his favorite things to do. He loved to go hunting with his brothers, son, Bobby, son in laws Leeland and Sam and grandsons, LJ and Aiden. He was an avid gun collector and loved all types of guns. He loved shooting with his great granddaughters Kyndall and Kamryn and great grandson, Aiden.

Following Cremation, services will be announced at a later date.

The family of Vern R. Jones respectfully suggests that donations in his memory be made to Hospice of Sweetwater County, 300 Broadway, Suite 220, Rock Springs, WY 82901

The family of Vern R.Jones will be receiving family and friends at the home of his daughter Dee Garcia, 1100 Woodhaven Drive in Rock Springs from 4 P.M to 7 P.M. on Wednesday, May 13, 2020.