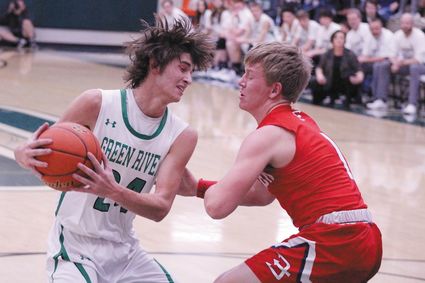 Dylan Taylor keeps the ball away from an opponent during a home game earlier in the season. The Wolves are headed to State and will play Thunder Basin Thursday at 1:30 p.m.

Following successful appearances at the Regional tournament in Evanston over the weekend, they will travel to Casper for one last tournament. The girls will play Cheyenne Central at 9 a.m. while the boys will take on Thunder Basin at 1:30 p.m.

At Regionals, The girls won their first appearance, defeating Cody 58-42. The Lady Wolves then took a narrow loss to the Rock Springs lady Tigers in a game that ended 60-51. The Lady Wolves were able to pull away from their loss and won their next two games. They defeated Riverton 57-4...