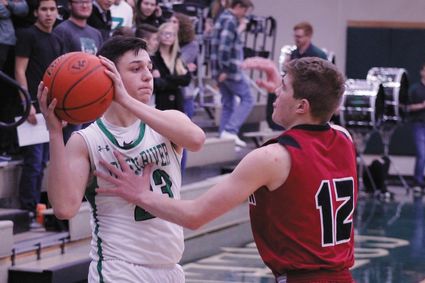 Jax Peterson looks for an open player during the Wolves' game against Riverton Monday night. The Wolves ended the night with a 78-64 win over the Wolverines.

Winning four of their last five games, the Green River High School boys basketball team is in a good position for Regionals.

Monday night, the Wolves defeated Riverton in a rescheduled home game originally intended to take place Feb. 14, but were cancelled due to road conditions. The Wolves also earned a win over Jackson Saturday afternoon in a 80-47 game. The boys lost to Evanston 67-66 Thursday night in a game that extended into triple overtime.

Ivie said the team has narrowed its focus to...