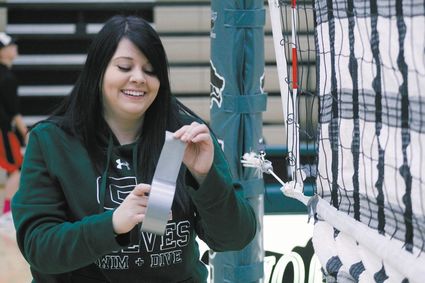 Marisa DeClercq peels strips of duct tape to hang a blanket over a volleyball net Monday evening. Blind Volleyball was one of the first Make-A-Wish events scheduled by the high school.

Monday night, after the Lady Wolves basketball team finished their practice, a group of students hurriedly set up a volleyball net, and hung a blanket across the net.

The name of the game is Blind Volleyball and the blanket was meant to keep players guessing about where the ball would come over the net.

The event, and several others occurring during the next two weeks, are part of a yearly fundraiser high schools in Sweetwater County conduct on behalf of the Make-A-Wish Foundation.

According to Emily Rayez, senior vice president of the GRHS student Council, student Councils throughout Wyoming have to raise money for the foundation.

However, she said Sweetwater County takes it to such an extreme, they no longer donate funds to single children and generate enough to fund multiple wishes. Marisa DeClercq, the student Council sponsor, said wishes cost approximately $6,000. Last year, schools in the county raised $34,000. DeClercq said the money raised stays in Wyoming, helping children throughout the Cowboy State. Multiple events are planned for the fundraiser, culminating in a Feb. 27 series of basketball games in Rock Springs.