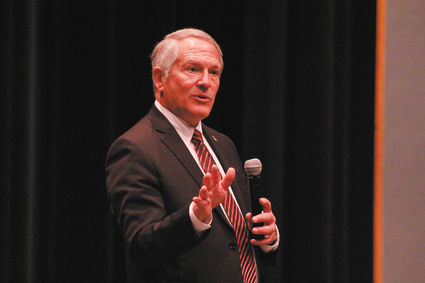 Neil Theobald, interim president of the University of Wyoming, speaks to Green River High School Students during an assembly Friday.

The University of Wyoming seeks more Cowboys from within the state.

Representatives visited with students at Green River High School Friday afternoon to talk about what the university offers, as well as the importance of a college education in the 21st century. The visit was part of a series of events hosted by the university throughout the weekend, culminating with a wrestling dual at GRHS Sunday afternoon. Joining the visiting students and professors from the university was the university's interim president, Neil Theobald, who spoke to students about his background and experience with Caterpiller Inc. when he was younger.

Theobald said he originally was an apprentice electrician looking at working in a Caterpiller factory after graduation. However, he was convinced to obtain a college degree and within a few years of enrolling at a university, the factory he originally intended to work at closed after the company decided to manufacture its equipment outside the U.S. He believes he would have been amongst thousands who lost their jobs.

"I think kids recognize how wildly different the world is now," he said.

Theobald said the university is stepping up aid to in-state students, announcing the creation of the Cowboy Commitment scholarship Wyoming students can apply for. The scholarship awards students based on their GPA and ACT scores and ranges from $500-$6,500 per semester for up to eight semesters.

The Cowboy Commitment can be used in conjunction with Hathaway scholarship money and is part of $2.2 million the university is offering in financial aid.

The visits are part of a state-wide outreach strategy the university is employing to reach potential students. GRHS was the 10th high school Theobald visited. He plans to visit all 44 Wyoming high schools.

So far, he said the reaction he's received has been impressive.

He gives students his email address and said he's gotten at least one follow-up email from each visit he's made.

"Once you start a family or get a mortgage, it's harder to go back to school," he said.