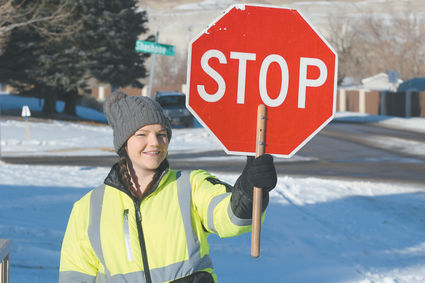 Natalia Corthell, a crossing guard at Truman Elementary School, stands with her stop sign outside the school Thursday afternoon.

Natalia Corthell helps dozens of children cross West Teton Boulevard every day as they walk to and from Truman Elementary School.

In the moments before walking to the center of the street and halting traffic with her large stop sign, Natalia has a chance to talk with the kids as they wait with her. A few end up telling her about their hobbies and interests.

"There's this one kid obsessed with history," she said. "He found an old penny and told me 'it was from the Germans.'"

Natalia said she enjoys children, discovering that joy while working as a student aide at Sage Elementary in Rock Springs. She said the students at Truman have treated her well during the school year and while someone did take one of her traffic cones at the start of the school year, she hasn't had any difficulties working as a crossing guard.

Aside from working as a crossing guard, Natalia has also taught swimming lessons at the Green River Recreation Center, where her love for working with children intersects with a passion for swimming. She was a member of the Lady Wolves swimming and diving team while in high school. While she admits she wasn't a great competitive swimmer, she enjoyed her years on the team. Natalia competed in the four freestyle events, as well as a part of teams swimming the 200 relay and the 400 relay.

"The (500-yard freestyle) turned out to be my favorite event," she said. "I enjoyed distance swimming."

Natalia has lived in Sweetwater County for 24 years and was originally from Adams, Mass. She said her mother brought her family to Green River, following other family members that had made the move to Wyoming. She said the economy in Adams, Mass., was dying and necessitated the cross-country move to Wyoming. Growing up in Green River, Natalia said she has fond memories as a teen playing games like night tag, a hide and seek game where people drive to a location, then call others and give clues to their location as they're being sought out.

Natalia lived in Rock Springs for a few years, but moved back to Green River as she preferred it over the county's larger city.

"It just didn't feel like a community that would help you," she said.

Her view of Green River comes from an incident that happened while she was in high school. Natalia said she was helped by a stranger during a snowy day while taking her brother and his friends to school.

Driving an old Chevrolet Impala, the vehicle got stuck in a snowbank on River View Drive.

A man driving a Ford Bronco was waiting at the intersection of Uinta Drive and River View Drive and decided to help out, backup the vehicle up the hill to where group was.

He towed the vehicle to the Ace Hardware parking lot, then drove them to their respective schools: Monroe Intermediate School, Lincoln Middle School and GRHS.

Aside from the willingness of Green River's residents to lend a hand, Natalia said she likes how quiet the city often is and believes it to be a safer place to live as well. Another aspect of the city she enjoys is the quality education children receive within Sweetwater County School District No. 2.

Natalia and her husband Carsen have one child, 5-year-old Carter, and expect a baby girl in March. Carter is enrolled in the district's junior kindergarten program, which are classes designed for children who are on the cusp of the enrollment cutoff. She said she was concerned about having Carter in the program because she wasn't sure what to expect. If Carter was placed in a regular kindergarten class, he would have been the youngest student. In junior kindergarten, he has the opportunity to learn with students closer to his age and learn what to expect at school.

"I love junior kindergarten," Natalia said. "It turned out to be the right choice."

The class has surprised her with what Carter is learning. He can read simple word books and has started reading them to his infant cousin through Facetime calls. She's enjoyed watching Carter grow up, but as Natalia prepares for another addition to the Corthell family, she admits she's somewhat nervous.

"I'm used to little boys," Natalia said with a laugh.

Outside of being a parent and a crossing guard, Natalia is busy preparing a nursery in her home. Painting has been a major task for her, painting both the crib and the room.

As she readies herself for a life with two children, Natalia is excited about what the future holds for her family in Green River.