Stories from Green River: The librarian with the colorful hair 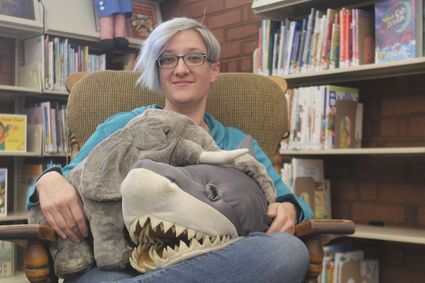 While many can easily spot the mother of two by the colorful hair she wears as she works at the Sweetwater County Library, much of Green River's youth have gotten to know Iwen through the library programs she hosts.

Iwen works as the library's youth services manager, hosting programs like its weekly Story Times, as well as events geared towards older children and teens. Over the past decade, Iwen has watched as a generation of Green River's youth has grown up, many of whom into teens and young adults with an appreciation for libraries.

"I like building these relationships with kids," Iwen said. "It does feel like a little library family. You get to see the babies that come in with their parents for Toddler Time, then they become toddlers."

Throughout much of her life, Iwen has worked at public libraries. As a teen in Big Piney, her first job was at the library, getting hired at age 15 and staying there until she graduated from high school. She worked at the Hay Library at Western Wyoming Community College as she juggled classes and responsibilities as a student ambassador and residence hall assistant. After she and her husband Eric moved to Glendive, Mont., she was hired to work in technical services at the library.

"I've worked in libraries in a bunch of different capacities," she said.

After Eric was hired to work at FMC, the Iwens moved to Green River. She soon was hired as a part time employee at the Sweetwater County Library. Iwen said she enjoys working with children, but she also supports the mission libraries have in society.

"A library should be a place you can go to look up information without judgement," she said.

Iwen considers herself a lifelong reader, which she attributes learning her mother, Marcha Albert. Albert helped her daughter learn to read, giving her the support she needed as she home schooled Iwen.

Iwen's favorite book series is the Harry Potter series by J.K. Rowling. She credits the series with creating clear connotations of good and evil for many readers and cites the strong world building and mythology Rowling introduced to her books as hooks that keep readers engaged.

"When reading a new story as a child, you look for a story to take you somewhere you've never been before," Iwen said.

The seven Harry Potter books were published between 1997 and 2007 while the eight films were released between 2001 and 2011, allowing for fans of the story in both mediums to grow up with the characters. Iwen said she's braved several midnight release parties as new books in the series were released and still holds a deep appreciation for the Rowling's Wizarding World to this day.

Outside of the library, Iwen enjoys spending time with her husband and their children Hale and Meeka. Hale is a freshman at Green River High School while Meeka is a student at Lincoln Middle School.

Becky and Eric met while both were studying at WWCC and married while attending the college. Hale was born shortly after the couple graduated while Meeka was born shortly before they moved to Green River.

The family enjoys several outdoor activities, such as cross-country skiing and backpacking. Iwen credits both her upbringing and her husband for her love of the outdoors.

Originally born in California, Iwen's father moved her family to Alaska while serving in the Air Force.

"A moose walking on the Air Force base wasn't uncommon," Iwen said. "He liked being in Alaska and requested to stay there."

When Iwen was 11, her father moved the family to Big Piney to serve with a small Air Force detachment in Boulder. Her family upbringing also is what influences her decision to color her hair. Iwen said she's always been a free spirit, but was raised in a religious household.

While tattoos and piercings were taboo, Iwen's mother allowed her to dye her hair because it was a temporary change. While Iwen still enjoys dyeing her hair, she said she will stop once that enjoyment leaves her.

Growing up in small, rural towns has also given Iwen an appreciation for what they offer a person.

She said she enjoys living in Green River because of the opportunities available to her and her family. One of her favorite services the city offers is the Green River Recreation Center, where Iwen often works out, believing the services and classes offered at the center are great additions to what is available.

"I think the rec. center has done a great job," she said.

"The people living here care about our community," she said. "That's very important to me."