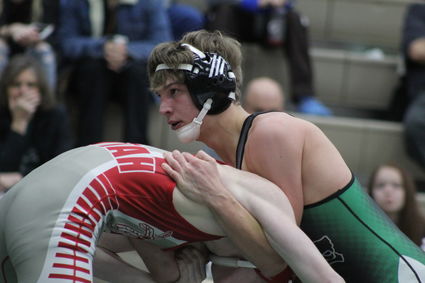 Kade Knezovich grapples with his opponent from Uintah High School in Utah during the annual Bill Thoman Soda Ash wrestling tournament in Green River last weekend. The Wolves came out on top at the tournament, placing first in the platinum group.

During pool competition Friday, the Wolves came out on top in Pool 1, with Worland taking second, Uintah, Utah taking third and Cokeville placing forth. The Wolves bested Cokeville 84-0, defeated the Uintah 2 team 51-24, then defeated Worland 60-18.

The Wolves won the platinum bracket Saturday after a close 38-30 win over Uintah. Rock Springs took third after defeating Evanston 42-34.

The Wolves will compete against Uintah again, this time in Utah, over t...