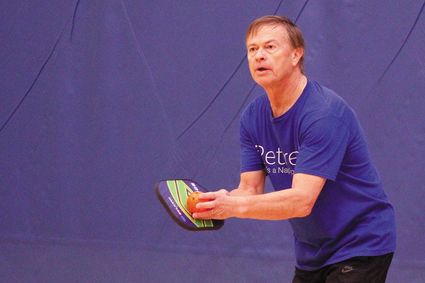 A growing sport, combining aspects of tennis, ping-pong and badminton, has earned fans in Green River.

Pickleball might not be a sport many people are familiar with, but anyone going to the Green River Recreation Center Monday, Wednesday or Friday morning will likely see a group of people playing on the gym courts. Classes teaching people how to play have been hosted at Western Wyoming Community College's Green River Center as well.

"I play in Arizona when I'm there and I play in Michigan when I'm there, it's big everywhere," Jerry Slebiska, a player at the recreation center said.

Pickleball is played on a badminton-sized court with a 34-inch net at the center. Players hit a wiffle ball with wooden paddles roughly twice the size of a ping-pong paddle. The game can be played either indoors or outside and can be played in either singles, doubles or triples formats.

In Green River, the sport has grown over the past few years, with much of that growth coming from people 60 years old and older. According to a 2018 AARP article, Pickleball is a great workout for older people because they can have an aerobic workout without a high risk of injury. Games also run 15-20 minutes, which allows players more opportunities for breaks between games.

Randy Walker, a former physical education teacher, said studies have shown the game to burn more calories than simply walking. He also said the game doesn't focus on physical ability which allows people in their 80s and 90s to remain competitive.

"I got my butt kicked by an 88-year-old," Teri Deakins, another player, said.

Walker said pickleball is a sport that can be enjoyed throughout life.

According to the USA Pickleball Association, the sport's governing body, the game was invented in 1965 by three fathers looking to create a game for their children because they had gotten bored with the usual summertime activities.

The name "pickleball" wasn't chosen right away and there is some dispute as to where the name came from. One account on the USAPA's website claims the name came from a family dog named Pickles that would attempt to catch the ball and run off with it, while another account listed on the website claims it came from the wife of one of the sport's creators. She used the idea of the "pickle boat" in competitive rowing, which would consist of rowers left over from other teams. The "pickle" in pickleball comes from how rules from different sports were incorporated into the game.