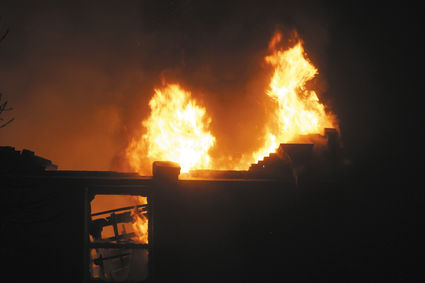 Flames raise from the Washington Square building Thursday night after the roof fell in on the second story. Firefighters battled the blaze throughout the night.

A fire at the former Washington Elementary School was contained to the upper floors of the building.

According to Green River Fire Chief Mike Nomis, firefighters were called to the Washington Square building at about 5:30 p.m., Thursday evening after smoke was reported coming from the building. Nomis said 26 firefighters were involved in combatting the fire. They were able to put out a majority of the fire by about 2 a.m. Friday morning, and were able to completely put it out by 4 a.m. Nomis said one of the challenges firefighters faced was the voids and walls within the building, which mad...