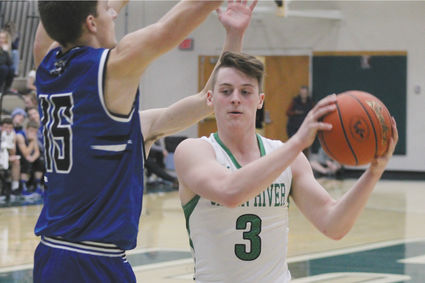 Michael Richardson looks for a teammate to pass to during the Wolves' game with Bear Lake, Idaho Saturday evening for the Flaming Gorge Classic basketball tournament. The Wolves lost 48-38.

After two weeks and eight games, the Green River High School boys basketball team will continue working on refining its game as the group heads into the Christmas break.

They're also looking forward to a needed rest.

Boys head coach Laurie Ivie said the two tournaments they've competed in have shown the coaching staff what they need to work on as they focus on an upcoming tournament in Cheyenne and the start of conference play afterward.

"Each game we've played has had its highs and lows," Ivie said. "Our biggest focus is playing four solid quarters."