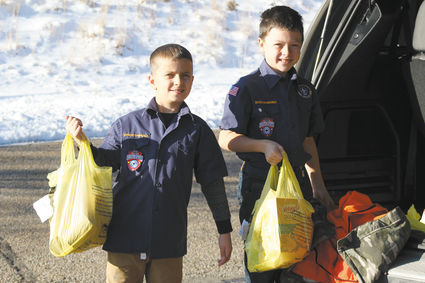 A longstanding tradition amongst the county's Boy Scout troops provided food for the food banks in Sweetwater County Saturday.

Seven Cub Scout packs and seven Boy Scout troops participated in the annual Scouting for Food Drive. Budd Allen, district executive for Boy Scouts of America, said scouts either prep their routes a week before the drive, handing out plastic bags to residences throughout the county, or they visit homes seeking donations during the drive. Allen said handing bangs out a week prior to the event tends to work best.

While no one was able to recall exactly when the food drive started, with volunteers speculating it has taken place for more than 30 years, its benefits can't be overstated.

Allen said the scouts bring in 16,000-17,000 pounds of food during the drive. A friendly competition between scouts in Rock Springs and Green River challenges them to do the best they can. Oftentimes, it's the Green River Boy Scouts coming out on top.

However, Allen admits the scouts aren't the only people involved and the food drive wouldn't be a success without the help of the scouts' parents and food bank volunteers.

"We're all involved with it," Allen said.