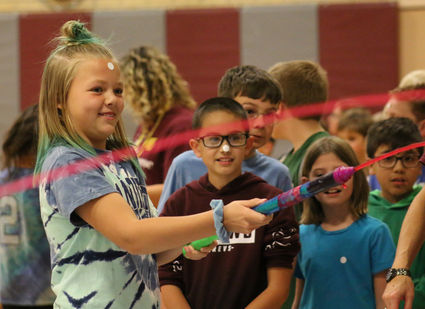 Nothing seems to motivate kids more than the opportunity to slime their principal.

Students at Monroe Elementary School worked hard to raise $11,907 in their first Dance-A-Thon fundraiser. All of the money raised will go to help the library.

Not only were the students rewarded with a dance party last week for exceeding their fundraising goals, but those who raised the most money had the chance to squirt principal Jared Hardman with red slime. About 140 students formed a line on both sides of the gym to cover Hardman from head to toe in slime as the rest of the children gathered to watch.

Hardman was wearing a mask to protect his face from the slime and a plastic cover with a big bullseye on the front of it.

At first, he was laughing as each kid squirted slime on him. However, at one point he had to take a break and wipe some of the slime off of his mask so he could see. 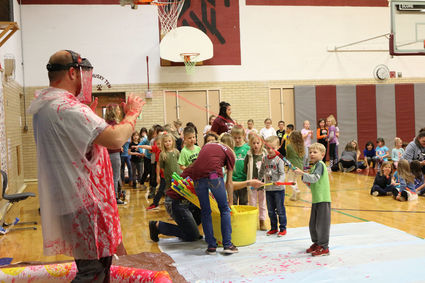 He was getting blasted from both sides and slime was splattering everywhere.

Even though members of the Parent Teacher Organization had placed tarps all over to catch most of the slime, some still stayed. As some PTO members filled the squirt guns with slimes, other wiped up the mess as best they could. This allowed for the children to enjoy the event.

Even though the children chanted for the buckets of slime to be dumped over Hardman’s head, that didn’t happen.

Students who raised the most money were then given gift cards for all of their hard work.