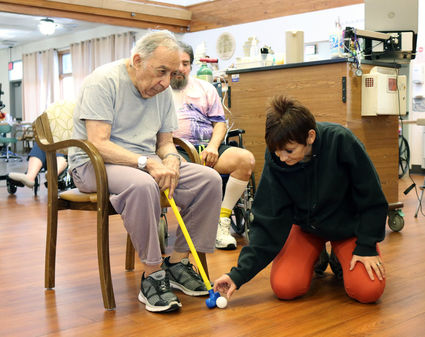 The residents take aim with their plastic, blue and yellow putter. They're careful not to hit the ball too hard or soft.

Once they think a shot is lined up, they swing the putter. Sometimes the ball goes in the hole, other times it misses and hits one of the five Halloween-themed indoor golf holes cutouts.

All of this was part of a Halloween golf game residents at the Mission at Castle Rock Rehabilitation Center were playing.

Cora White, CRRC activities assistant, walked around the center inviting all to play a game of golf. The object of the game was to hit a golf ball through one of the six Halloween-themed cardboard cutouts. Each cutout was different, consisting of a ghost, pumpkin, witch, black cat, a monster and a vampire. However, they all had one thing in common, a hole the same size where someone could shoot a golf ball through.

Kathy Forman, Rex Adams, Harry Karician and Anna Caudle were the first ones to play the game. Forman seemed like a natural as she would putt the ball through hole time after time. About 5 minutes later, White asked Forman if she was getting tired and Forman said she was, so Adams decided to take a turn.

Adams enjoyed the challenge of the game and didn't want to stop even when his turn was over, so White told him when everyone had a turn to play he could go again.

"Come on Harry you can do it," White said.

Once he got the putter in his hand, his attitude changed and he had some power behind his swing. He made several shots through the pumpkin. Even though he had fun, he needed a break and it was now Caudle's turn.

At first, Caudle was hitting the balls all over the place and started to apologize to White for making her get the balls over and over again.

"You're just making sure I get my exercise too," White said.

Once Caudle got the hang of it, she would laugh after she made it through one of the cutouts. She then proceeded to hit the ball through the ghost numerous times.

She then turned her focus to getting a ball through every, single cutout and after numerous attempts and persistence, she was able to do so. The laughed hard when she accomplished her goal.

With no one else wanting to play, Adams happily got in line for another turn. 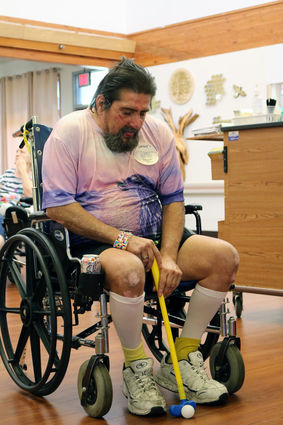