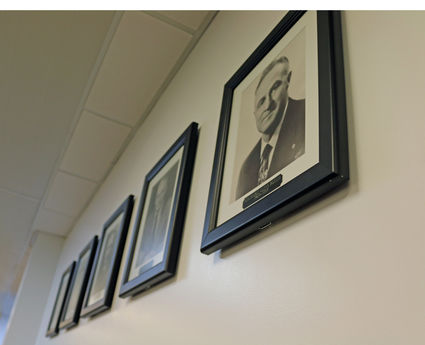 These photos tell the story of the Third District Court judges who served in Green River throughout the years. So far, only five are on the wall, but more will be added as they are finished.

They were placed in a cardboard box and stored in a maintenance storage facility.

Even though some knew where they were at, they were forgotten by most.

However, recently retired Third District Court Judge Nena James didn't forget and was on a mission to get a project taken care of before she officially retired Oct. 18.

The items in the box were old photos, some in deteriorated frames and some without, of former Third Judicial Court judges who presided over Green River.

"Judge (Jere) Ryckman and I talked about this years ago and just never got to it," James said.

Ryckman was a Third Distric...