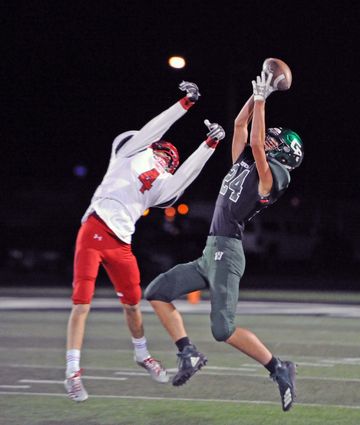 Dylan Taylor reaches high as he attempts to catch a pass during the Wolves' meeting with Evanston Friday night.

With the 14-7 win over Evanston, the Wolves are still in the running for a possible playoff game.

The Wolves started off receiving the ball and Isaac Ruiz brought the ball out for a 21-yard return, but the Wolves were three and out quickly.

The Red Devils got the ball and were in a fourth and 13th situation when they went for it, but they were 3 yards short. The Wolves took over the ball, but had to punt.

A big defensive play by Wolves Tayler Jensen and Payton Tucker created a big stop making it second and 16 for the Red Devils. They were on a fourth down and decided to punt. A bad snap fro...