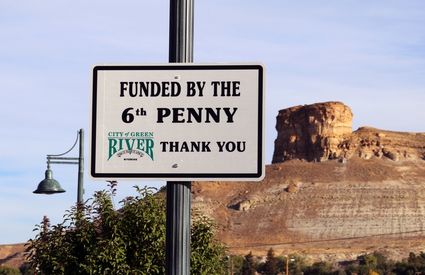 The city is going to request about $53 million in projects, which will be completed using the sixth-penny special purpose tax funding, if the tax is approved.

Tuesday night, the Green River City Council once again reviewed its lengthy list of projects that at one point reached near $96 million to determine what Green River absolutely needed.

City Council members have stated numerous times all of the projects on the list are not "wishes," but necessities. However knowing the Sweetwater County Commission wants to move forward with $80 million to $100,000 million in projects for the entire county, the Council trimmed its list even more.

City Administrator Reed Clevenger presented the Council with an option Z plan, which brought the project list to about $49.5 million, after $3.4 million was removed from street overlay projects.

The final list to be presented to the Commission will include the following:

He said they reduced it to $49 million to keep it under $50 million.

"I think this is perfect just the way it is," Mayor Pete Rust said.

However, he wanted to know what the rest of the council thought.

Councilman Gary Killpack said he supported Option Z, but was still concerned the county may not allow the city to request this much money.

"One I think is going to be really unpopular, even though I'm not opposed to it, but I kind of am, is the airport," Killpack said.

"I don't think the public will be very much in favor of putting money in at the airport, but that's just my personal opinion."

Killpack was referring to the $57,000 the city will match in grants to pay for improvements to the airport, including wildlife fences.

Councilmen Mike Shutran and Robert Berg wanted the amount request left at $53 million, so the city could still do street overlays. Both he and Shutran said streets are a priority.

Councilwoman Lisa Maes wanted the city to ask for even more, saying the city is even farther behind in projects since no tax was put back on at the last election.

Councilman Jim Zimmerman said when people pay for a tax, they want to see what the money is going for, which is why the street-improvement projects are so important.

"We need to give them something they can see," Zimmerman said.

With about 70 percent of the entire request going toward street improvements, the majority of the Council was in favor of asking for the $53 million knowing they may need to make changes.

"We're going to have to make some adjustments," Rust said.

For now, they are OK with the number.