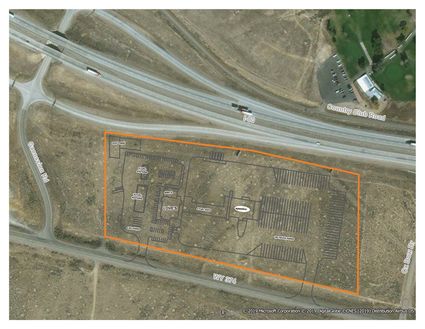 While almost every written comment submitted to the Sweetwater County Planning and Zoning Commission was against placement of a Love's Travel Stop near Jamestown, people commenting at their meeting last week were more split on the issue.

While some focused on issues like increased litter and traffic, others focused on what the truck stop could do for nearby development. Kael Jasperson, vice chairman of the Jamestown-Rio Vista Water and Sewer District said the district isn't advocating for the truck stop specifically, but is advocating and in favor of development within the district. Jasperson sees Interstate 80 as a resource the community should find ways to tap into, especially as other established industries are waning.

"When coal goes away, so do the power plants," he said, referring to continued uncertainty about the future of the Jim Bridger Power Plant.

Jasperson, also referring to a letter submitted to the county mentioning the lack of commercial business in Green River, said businesses like a jewelry shop or grocery store were not attempting to set up shop near Jamestown, but Love's is and while it isn't a perfect development that everyone can support, the truck stop would provide benefits to the area.

"I don't see any adverse effects that can't be dealt with," he said.

Another person in support of Love's permit is Stewart Grow, who owns land south of the proposed and said he represented seven of 13 lot owners in favor of the truck stop.

He said the property owners participated in the water and sewer district because they hoped it would ultimately spur development in the area.

"We need to start with something ... and a truck stop isn't a negative," he said.

Grow said a truck stop would bring a lot of interest and traffic to the area. While he admits not every aspect of the proposal is a positive, he thinks Love's has incentives to keep negative aspects like garbage under control. But, not everyone agreed with Grow's assessment.

"They are not a Little America," Dallas Koons, a Green River resident, told the commission.

Koons brought photos taken of the Love's in Wamsutter showing garbage being left to blow around the property. He said the images were taken in March. Koons also submitted a petition he said was signed by residents against placement of the truck stop.

Jamestown resident Allan Jarnagin also spoke against approving the permit, citing his concerns that small amounts of spilled fuels would eventually make their way into the soil and the Green River. Jarnagin also raised concerns about the length of the exit ramp leading up Peru Hill on the westbound side of the interstate. As a truck driver, he disagrees with traffic studies suggesting the length of the ramp would be sufficient for trucks to safely merge into traffic, saying trucks would have to pull up a 6 percent grade from the start of the ramp to the top of the hill.

He said he wasn't against Love's in particular and said he would be in favor of the truck stop if it were placed at the top of the hill. The commission voted 4-0 to unanimously recommend county approval of a conditional use permit for the truck stop.