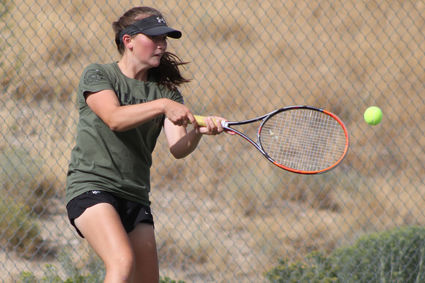 Gabrielle Heiser swings at the ball during competition at home Tuesday afternoon. The Wolves were clad in special tennis uniforms to honor veterans during the game.

After weather forced a postponement for a home series against Rock Springs, the Green River High School tennis team traveled to Natrona County to take on both Kelly Walsh and Natrona over the weekend.

While the visit would end with narrow defeats by the boys and girls from Kelly Walsh, both varsity tennis squads shut out Natrona. The non-conference meet between Rock Springs and Green River was postponed to Tuesday, with the Wolves and Lady Wolves earning the victory over their Sweetwater County rivals. The boys earned a second sweep against Rock Springs. The two teams met again Thursday aft...