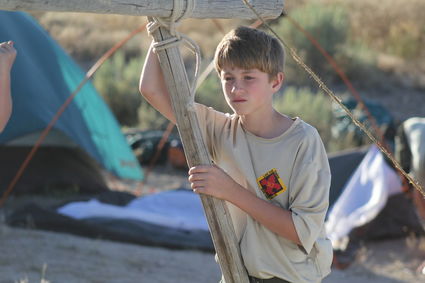 Logan Wadsworth steadies the A-frame as winds blow against the structure while other scouts tie it to stakes.

The right group of people can build anything and the members of Boy Scout Troop 312 decided they would build an A-frame structure to fly their flags at the annual Spaceport Days during the Greater Green River Intergalactic Spaceport. 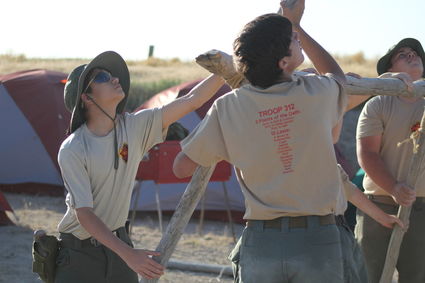 Cecil Cole, left and Eli Thomas, center, help navigate their section of the A-frame against a second section while fighting heavy winds.

According to Eli Thomas, who led the group in erecting the structure, the troop builds the A-frame for public events and summer camp because it looks better to fly their flags from.

The endeavor was a challenge for the group of Boy Scouts. High winds blowing at the landing field was causing a nearby windsock to fly horizontally.

The wind hindered the boys' efforts, especially when tying the flagpoles to the frame, but they overcame.

"I'm glad we were able to get it up in this wind," Thomas said.