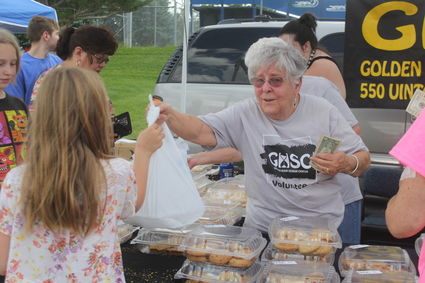 Cleone Haughey, right, hands a bag of treats while volunteering for Golden Hour Senior Center's booth at the weekly Green River Farmers' Market. The center plans to use the proceeds for its tech center.

For several weeks, volunteers of the Golden Hour Senior Center have been selling baked goods at the Green River Farmers' Market and they have been pretty successful.

According to GHSC Executive Director Jackie Grubb, the senior center's baker Janice Castillon bakes everything for the market. The items sold on Thursdays are baked throughout the week.

"Our biggest seller is her cinnamon rolls," Grubb said.

Even though cinnamon rolls are a big seller, her other baked goods, including cream...