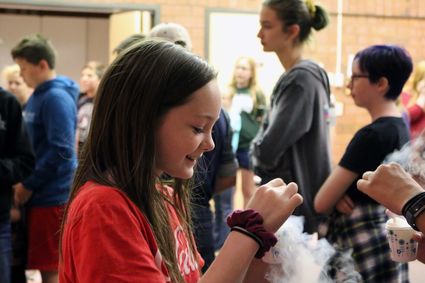 Dakota Casey reacts to the liquid nitrogen placed in her cup.

Marc Straub of Cool Science visited the Sweetwater County Library last week showing the teens how they can use liquid nitrogen to make ice cream and Dippin' Dots.

First, he started off the program by asking the teens where milk for ice cream comes from. Most of the teens answered cows, however after Straub said any mammal can produce milk teens added goats, cats, dogs and camels to the list. He said around the world people use different kinds of milk, like Americans use cow's milk.