Schultz to play ball in Mont. 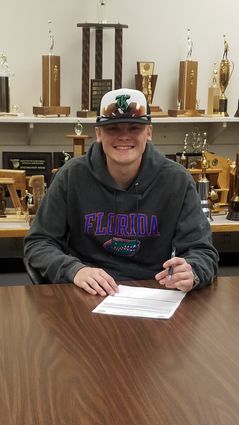 One of the Green River Knights will be going to college in Montana to play college baseball as a Buccaneer.

For Schultz, baseball has been a lifelong love, being first introduced to the game when he was four years old.

"I got hooked really early," he said.

He said he used to watch televised games and dream of playing at a higher level.

As for signing with Dawson Community College, Schultz said he was introduced to the school by his coach. After visiting the school and its program a few weeks ago, he decided it was the best place for him. He said the coach's dedication to the team and how it was able to achieve some success despite losing its original coach a few days before its previous season impressed him.

"I'm grateful for the opportunity," he said.

Schultz said he's signed to play shortstop, a position he plays already for the Knights.

While he's unsure of what he eventually will major in, Schultz said he currently is considering becoming a registered nurse or working in the sports medicine field.

This season will be his last as a member of the Knights. Schultz called the current team the greatest team he's played for and said he will miss his teammates when he leaves. He said the players and coaches have bonded well and he enjoys playing with the group.

"I'm proud of what we've accomplished," he said.