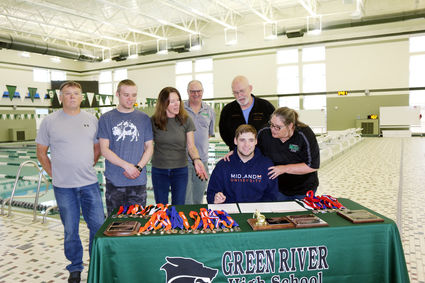 Michael Richmond signs his letter of intent with Midland University while members of his family and his coaches gather for the occasion. Those at the signing were from left to right, Mike Richmond, Jason Richmond, Jan Richmond, GRHS coach Rick Barker, Richmond, USA coach Randy Walker, GRHS head coach Colleen Seiloff.

After 10 years of swimming for Green River, Michael Richmond will move onto the collegiate level.

On Friday, Richmond, who was surrounded by a table filled with medals and plaques he earned over the years, signed a letter of intent to swim during his time at Midland University, which is a four-year college in Nebraska.

"They just gave me the best offer out of the two colleges I visited," Richmond said.

The offer wasn't all that impressed him during a recent visit to Midland.

"I felt really at home with the Midland team," Richmond said. "It was a very welcoming team."