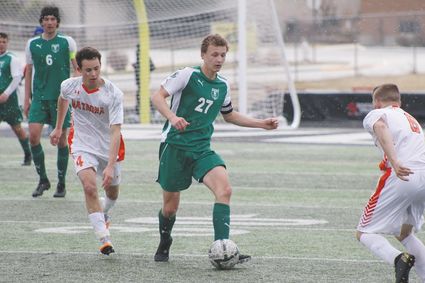 Grant Cobb works to outpace a Natrona player as he maintains control of the ball Saturday morning at Wolves Stadium.

Residents driving by Wolves Stadium Monday evening would have seen the Wolves soccer team working hard at a time when most high school students are enjoying spring break.

For head coach Chris Bieber, the last week of competition showed him the team needs to improve to remain competitive.

"We have stuff to work on," Bieber said.

At the beginning of the month, the team defeated their Rock Springs rivals 2-1 at home, which was followed up the next day with a 2-2 tie against Evanston. Last Tuesday, the boys traveled to Jackson and returned home with their first loss since their March 22 game against Riverton. The game ended 2-1 in favor of Jackson and was also decided in overtime. While many of the team's games have been decided in overtime in past seasons, playing longer than necessary is something Bieber would rather avoid.

"I just want to end it and be done," Bieber said.

This past weekend, the Wolves had mixed results when facing the Natrona County teams at home. The boys earned a tough win over Kelly Walsh Friday afternoon in a high-scoring match ending 5-4.

Bieber said Kelly Walsh always brings a tough game with them when they face the Wolves, often being one of the stronger teams they compete against.

"They're a good team. They're always tough to play," Bieber said.

The Wolves match against Natrona didn't fare as well, losing 2-1. For much of the game, the two teams were tied until Stoeger scored a goal with 22:44 left in the game. The Wolves would hang on to the lead for just over 11 minutes, with Natrona tying the game with 11:48 in the game. Natrona sealed their win with a second goal with 3:58 remaining.

Bieber said the loss was an unfortunate defeat for the Wolves, saying the boys had difficulties clearing the ball properly.

This week, the team will take on Star Valley in Afton. Bieber said he isn't sure what to expect from the team as he hasn't seen them play. However, he said Star Valley is scoring against teams they've played against, saying he thinks the Wolves are in for a very physical game. The Wolves will then face Jackson for a second time at home Saturday.

The game is scheduled to start at noon.