Biker memorial constructed to honor those who died 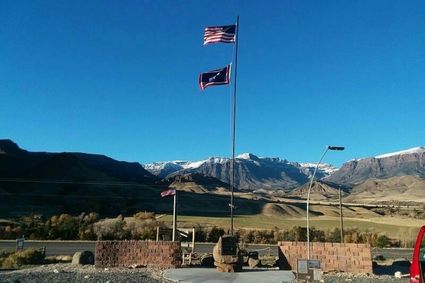 A man from Cody is traveling around Wyoming trying to spread to word about the Fallen Biker Memorial he built.

The biker memorial Mike DeGlau constructed throughout most of the summer last year is located memorial is 20 miles up the North Fork Highway near Cody, which is on the Way to Yellowstone National Park.

The location was selected because DeGlau has a friend that owned a portion of land next to that highway and it's highway visible because of the traffic to and from Yellowstone National Park.

DeGlau said he knows this memorial may not be located in southwest Wyoming, but there are already plaques on it with Sweetwater County residents' names on them.

The memorial was created by DeGlau to act as a way to remember fallen bikers. Wyoming is averaging 16 motorcycle fatalities.

According to the website fallenbikermemorial.com, the biker memorial is "a place to remember the ones who died while riding Wyoming roads."

He wants to encourage everyone to be aware of their surroundings and look twice for motorcyclists when traveling in Wyoming.

"We're trying to bring the fatalities down," DeGlau said.

The state of Wyoming is on board with it and even provided the signage around the memorial site.

Even though DeGlau completed 90 percent of the work himself, which he paid for through is own money and some donations, the memorial isn't for him.

"It was built for the state of Wyoming," he said.

Currently, 17 names are on the memorial already, including Rick Sanchez and Randy Lowseth of Green River.

A plaque stating, "Gone, but never forgotten," is one of them located at the site.

Something DeGlau learned about the site, is it's not far from the spot where three German tourists were killed in a one-pickup, five-motorcycle collision the summer of 2016.

There are three Wyoming fatality markers across from the motorcycle memorial site.

DeGlau said this lead to another idea: having motorcyclists only fatality cross markers so travelers would know just how many motorcyclists were killed on Wyoming roads.

Even though DeGlau has already placed the flag poles with the Wyoming and United States flags, the 85-pound blocks, the gravel, the rocks and the recycled asphalt, he still wants to do more.

He said the memorial isn't done yet, but he had to raise more money to complete more work.

He would also like to construct an archway in the center of the memorial, have someone create a siloutee of a firefighters with hands out like a cross and build a kiosk with information on it about the memorial.

Currently, the information, which is on laminated papers, about the memorial is placed on a piece of wood.

For more information about the project or to learn about upcoming fundraising events across the state for this memorial, visit the website https://fallenbikermemorial.com