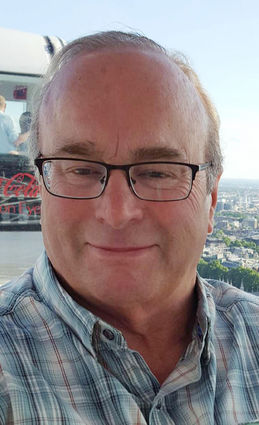 He graduated in 1971 from Riverton High School and graduated from the University of Wyoming in 1977 with a degree in broadcasting. He began his professional career at KTNW in Thermopolis and then moved to Rock Springs to be a production manager at Sweetwater Cable TV.

He freelanced in production until his retirement.

He was an accomplished woodworker. He was recognized for his hand-made split-cane bamboo fly rods as part of the 2014 Art of the Hunt Exhibition at the Wyoming State Museum.

And, in 2015, he had a one-man show at the Community Fine Arts Center, in Rock Springs, featuring his handcrafted boats and fine wood crafted projects. He was an avid reader and a strong supporter of libraries. He loved visiting and talking with people including coffee groups in Rock Springs and Green River.

He loved mountain biking, cross-country skiing and floating through Seedskadee. He enjoyed gardening and birdwatching. He traveled extensively and cycling in Ireland was a passion.

Fred met his future wife, Paula Wonnacott, in 1984, when she began her professional broadcasting career at Sweetwater Cable. Fred and Paula were finally married on Aug. 21, 2017, in Riverton at the home of Kim Wilbert and Wendy Barteaux during the solar eclipse.

He is survived by his wife Paula of Rock Springs; his sister, Maritom Pickett of Hayden Lake, Idaho; his brother, Tom Pickett of Argentina; a nephew, Karl Pickett of Naperville, Ill., a niece Elly Henning of Gillette, and sister in-law Tula Patterson and her husband Max of Spokane, Wash.

He was preceded in death by his father, Thomas J. Pickett; his mother, Minnie Eleanor; and his brother T. Bob Pickett.

A celebration of life took place in Rock Springs at the Bike and Trike on Jan. 29.

Another celebration of life will take place in Riverton Aug. 21, 2019, at Kim Wilbert's and Wendy Barteaux's home.

The family respectfully requests that donations in Fred's memory be made to a charity of your choice.

Condolences may be left at http://www.vasefuneralhomes.com and cards may be sent to Paula Wonnacott at 10751 North Lakeview Drive, Hayden Lake, Idaho, 83835.