Anyone order some dog donuts?

A book motivated one Green River preschool class to make dog donuts and then take them to the animal shelter to feed the dogs.

Last week, Nancy Johnson’s Monkey Class at the Green River Sweetwater County Child Development Center visited the Animal Control Shelter to see how dogs would react to the dog donuts they made.

The idea came through the book called “If You Give A Dog a Donut,” by Laura Numeroff. Johnson picked the book because the class was focusing on the letter D and thought this would be a great book for her to read the class. Johnson read and reread the book to the class several times and it got to the point where the children could recall the book and even fill in the words Johnson would leave out on purpose.

The children were also asked a lot of questions about the book.

“These questions help us to ensure that the child comprehends what he’s hearing in the story. We often talk about the pictures in the story and some of the words in the story,” Johnson said.

She said the class will often discuss if a book is real or make believe. In the book, the dog talks and asks for more apple juice after eating a doggie donut.

“I thought that bringing the story to life and actually giving real dogs real donuts would be fun for the kids,” Johnson said. “We often compare what is real in a story and what is make-believe when reading stories. The children had to predict what they thought the real dogs would do if you have them a donut. A real dog would not ask for more apple juice like it does in the book, however, some children thought that might happen as evidenced by their predictions.”

With the idea in mind, Johnson found a dog donut recipe on Pinterest and the children helped her make the donuts.

“Turn taking is a big part of what they learn when we do cooking activities because everyone wants to be involved,” she said. “We also learn what a recipe is and that we have to measure the ingredients to make it turn out the way the recipe intends.”

The children also learned that sometimes what they think a recipe will look like isn’t what it is. For example: the first ingredient to add was oats. Johnson asked the class if that looked like donuts and they responded with a collective “No.” The class helped put ingredient after ingredient in the bowl until it resembled donut batter.

The students then put the batter into donuts pans where they pushed down on the batter to get it to donut molds in the pan.

“Due to time constraints in our schedule, the children did not help take the donuts to the kitchen for baking. We often include that when we bake,” Johnson said. “They did however, get to see the end product that day. They saw how the donuts were put into the little donut molds and then saw what they looked like after they were baked.”

With cookies baked, Johnson lined up a field trip to the animal shelter. Prior to visiting the shelter, the children were encouraged to help write a story based on their predictions of what would happen at the shelter when they met the dogs and gave them dog donuts.

Last Wednesday, the Monkey Class visited the animal shelter to give the dogs their donuts.

“It’s important because some children need to learn in a different way. You can tell them that the story is make believe, but seeing and doing it in real life is just another way for kids to learn,” Johnson said. “Some children might not have pets and know that dogs don’t talk. TV and games portray dogs talking like the story so they might still have trouble registering real and make believe.”

The children were excited when they arrived at the shelter. Once there, they received a tour of the shelter and they saw dogs, cats and event a chicken. They then learned about all of the equipment on an animal control truck. One student even climbed into the control truck kennel. While at the shelter, the children learned how to approach a stray dog and other interesting facts about dogs and other animals.

“This was an added bonus to the lesson of real and make believe,” Johnson said. “We continued to practice that when we got back to the classroom. It was interesting also, the various animals that animal control is called to come and take care of. I don’t think that many of the children had ever seen a chicken close up like they saw at the Animal Shelter.”

When the children returned to the classroom, Johnson wanted to find out what the children thought of the experience. 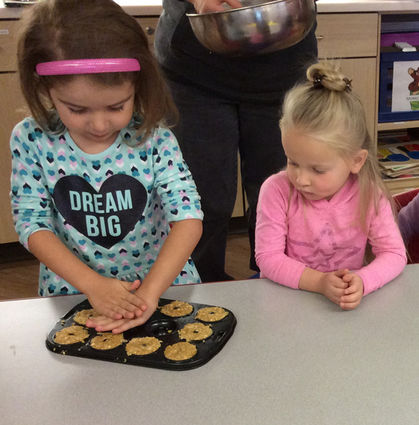 “I asked the children when we returned what their favorite part was,” Johnson said. “Anticipating that it would be feeding the dogs the donuts, being we have talked so much about dogs and donuts, I was surprised when their response was seeing the cats and the chicken.”

With the field trip a success, Johnson will keep it in mind for next year’s class.

“I was extremely happy with the outcome of the project and field trip. We will continue other cooking activities throughout the year,” Johnson said.

She said the class might add other Laura Numeroff books to the reading list and do a comparison later on of her books, including “If You Give a Pig a Pancake” or “If You Give a Moose a Muffin.”