A red wave hits the county 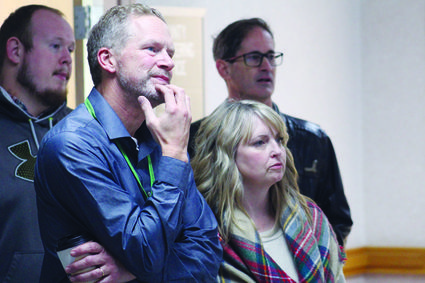 Eric Bingham and his wife, Elizabeth, concentrate as they stand amongst a group of county residents watching election returns at the Sweetwater County Courthouse Tuesday night.

All three Republicans vying for seats on the Sweetwater County Board of County Commissioners won their electoral bids, while the Republican challengers for county sheriff and county clerk also made successful election bids.

Incumbent Randy Wendling received the most votes of the three Republicans, earning 7,987 according to unofficial results from the Sweetwater County Clerk's Office. Jeffery Smith and Roy Lloyd were only separated by three votes, with the two earning 5,612 and 5,609 respectively.